Each year 100 million sharks die worldwide in fishing nets or on longlines. That's almost 275,000 sharks per day. 73 million commercially fished sharks are destined mainly for the Asian fin markets and these are just the figures for commercial fishing. 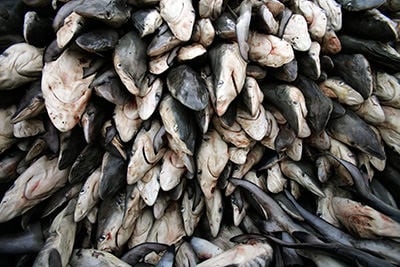 These are the figures for commercial fisheries. Sharks caught in the bycatch of huge international fishing fleets and sharks caught by game fishermen and then discarded are not included. It is estimated that out of 73 million commercially fished sharks, only the fins land in the mainly Asian fin markets. This means that only 25 % of the caught sharks are really used sensibly, e.g. because of their meat.

Some countries have established shark protection zones in their territories, as a live shark is worth much more than a dead one. For the Bahamas, it was once calculated that a live shark generates 10,000 tourism dollars per year while a dead shark generates 300 - 500 dollars once, depending on the species. But the fishing industry doesn't care about that, for them it's the fast money that counts, the here and now. If in rare cases there are bans and shark protection zones, then poaching takes over. The fines and imprisonment for individual fishermen only slightly reduce any corporation profits. And, the oceans are big. Most professional poachers get away with their prey unscathed.

Besides commercial fishing, however, recreational fishermen are also a factor that further decimates shark stocks. Machos - male and female - want to prove their "manhood" by defeating a big shark. Although "tag & release" is becoming more and more popular, especially in international game fishing competitions, many of the big pelagic sharks in particular die as a result of game fishing.

"Tag & release" probably also serves more to calm the conscience. The probability of survival for a shark that has often fought on the hook for hours is not very high after release. In addition, the fight can cause severe damage to their jaws.

Here's a word about scientific shark catching. To better protect sharks, we need to know more about them. We still know too little about, e.g. their behavior, biology, genetics, physiology, reproduction and migration routes. Remote investigations are possible for certain questions, for others a shark has to be caught, e.g. to take a tissue sample or implant a satellite transmitter. For these scientific investigations, sharks are caught as gently as possible. Gentle methods are e.g. drumlines and longlines, where hooks with bait float freely in the water. The sharks bite the bait, but do not have to fight actively. In addition, compared to commercial fishing, the lines are only left in the water for a very short time (approx. 1 hour) in order not to stress the sharks too long. It is certainly not ideal and sharks can die, but without science there can be no serious, fact-based shark protection.