Are these bodies and fins from protected sharks? Often not even shark experts can determine exactly what kind of shark species the products stem from. Prof. Mahmood Shivji's laboratory is developing a simple identification method to identify various shark species from tiny tissue samples. 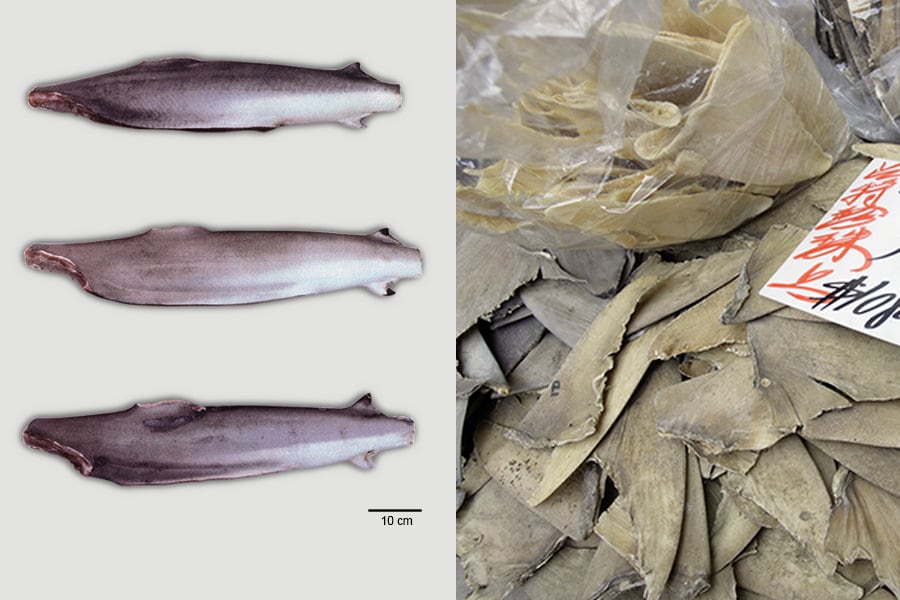 Which shark species do these products come from?

Processed sharks without head and fins (so-called logs), shark fins or other shark products are often very difficult or impossible to classify into one species – not even by specialists. For example, customs or fisheries inspectors who examine a catch often cannot determine whether the products come from protected species or not. Where the sharks originated is also difficult to determine, but this information is essential for shark protection and fisheries management.

Prof. Mahmood Shivji's project aimed at developing and testing safe, simple and inexpensive methods to identify shark species using very small tissue samples. With these molecular genetic tools, shark catches on board ships, fins found in fin markets and other shark products can be quickly analyzed for species composition and, in some cases, can even determine their origin.

The tests are based on the analysis of genetic material (DNA) that is unique to each species and individual. In Prof. Shivji's laboratory, highly specific markers are developed which bind to DNA parts unique to the species.
In order to determine the shark species from a given sample (it can also be a mix of samples from different sharks), the DNA in the sample is first multiplied by multiplex PCR (polymerase chain reaction) to such an extent that it can be made visible with the help of the marker. The DNA sample is then applied to a gel and in an electric field the individual DNA pieces separate from each other according to their size. By treating the gel with the species-specific marker, or a mix of markers, it binds itself to the DNA pieces specific to the species and can be made visible. An example of such a gel can be found below.

Gel electrophoresis method to determine the species of sharks in a sample.

Particularly prominent was the development of a marker for great white sharks, which also enjoyed strong media presence. This marker helped to ensure that great white sharks were taken up into Appendix II of CITES.

A further study dealt with finding products made from basking sharks on the international market.

Additional biological and other investigations important for the protection of the sharks were carried out on hammerhead sharks.

The project also provided important new insights into the reproductive biology of sharks. In 2008 Prof. Shivji's group discovered that female sharks can give birth to young without their eggs being fertilized by male sharks. This amazing discovery of "virgin birth", scientifically called parthenogenesis, in sharks has attracted wide media attention worldwide and now means that textbooks on vertebrate reproduction need to be revised to reflect these new findings.

More than 15 scientific publications were published during the project.

During the course of the project, the Foundation primarily co-financed the costs for the development of molecular genetic analyses, the work of PhD and diploma students, the shipment of samples and consumables as well as other expenses important for the project.

The project was successfully completed in 2015.