Shark "nurseries" are often located in shallow waters overgrown by mangroves in which the young sharks can grow up protected from larger predators. Unlike bony fish, sharks bear only very little young so that the survival of each young animal counts. 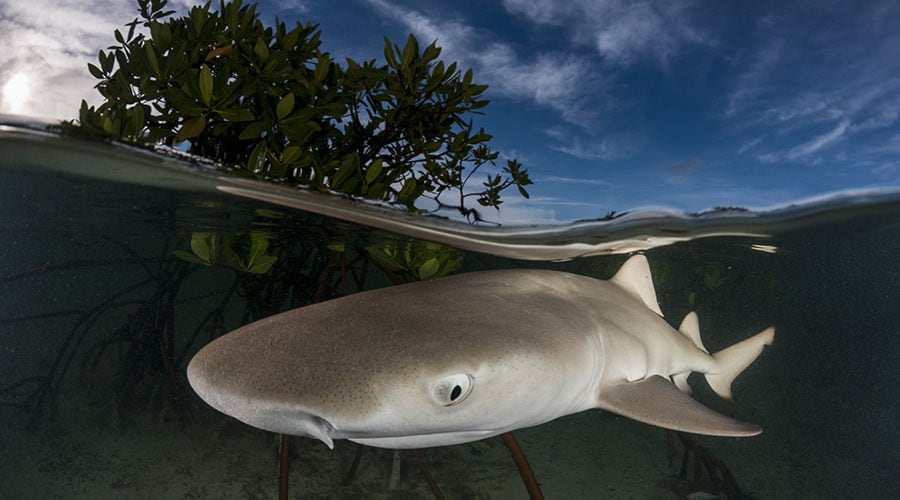 Many shallow water regions, primarily the mangrove fields in warmer waters, are becoming more and more rare because they are cleared for land reclamation, as well as fish and shrimp farms. The few still surviving mangrove regions are threatened by pollution and other factors mostly caused by man. More information about the threat to the mangrove forests.

Understanding the interaction of the mangrove forests and its residents is valuable for the protection of the sharks.
The area of Rookery Bay/10,000 Islands in Florida is a large field trial. The state of Florida bought back a piece of land that had been drained for a gigantic construction project that failed and now wants to restore it to its original marsh condition. For this purpose the canals used to drain the land will be locked. In the course of this regeneration project less and less freshwater flows out of the field which in turn changes the salinity and other chemical and biological factors in the coastal mangrove field. The project thus aims at examining the long-term effects on young sharks in the nurseries resulting from such changes.

Entrusted with the project is Pat O'Donnell in cooperation with the Mote Marine Lab. A large portion of project work is carried out with the help of enthusiastic volunteers from the region. This has many advantages. On the one hand the work cannot be done by Pat O'Donnell alone (supervisor of the nursery project), and on the other hand the volunteers become ambassadors for shark protection.

Together with the volunteers, juvenile sharks are caught periodically with longlines in the areas being researched. The team collects information on the species, size, age and health condition and takes small biological specimens that undergo molecular-genetic analysis later on.

Ever since 2002 an average of 100 juvenile sharks have been caught and measured each year. Of these about 90 of them were marked, 4 others were recognized by their markings as recaptures, and the mortality rate amounted to about 8 sharks. As to the species catch composition, bull sharks were the most frequently caught, followed by bonnethead hammerhead sharks, lemon sharks and blacktip reef sharks. Rarely captured were nurse sharks, Atlantic sharp-nosed sharks, great hammerheads and scalloped hammerheads.

A preliminary genetic analysis of juvenile lemon sharks showed, as expected, that their parents stem from the Gulf of Mexico and not from the lemon shark population on the eastern Atlantic coast of Florida.

The comparison of three regions – Faka Union Bay, Pumpkin Bay and Fakahatchee Bay –revealed that the salinity of Faka Union Bay was 30% under the concentration of normal seawater during the rain-laden months. This in turn influenced the species composition of juvenile sharks and as it turned out, these were almost only bull sharks who can also survive in freshwater.

A hurricane hit the area in August 2004, causing the houseboat from which the project was carried out to sink. The Foundation financed the restoration of the houseboat with CHF 8,800 in 2005.

Restoring this region in the Everglades to its original condition has been greatly delayed. Greater progress was not noted until after 2016 when 50% of the project was completed. The collection of data thus continues.

In the meantime the project has become self-supporting thanks to other financial sources as well as extensive volunteer work. The Shark Foundation will, however, continue to support it whenever necessary.

Donate now
We also use cookies for our web pages. Some are essential, others simplify your use of our pages.
You can accept or reject these cookies. However, in case of rejection, certain functions of the pages may no longer be available.
Ok Decline
Terms & Conditions and Cookie Policy Imprint