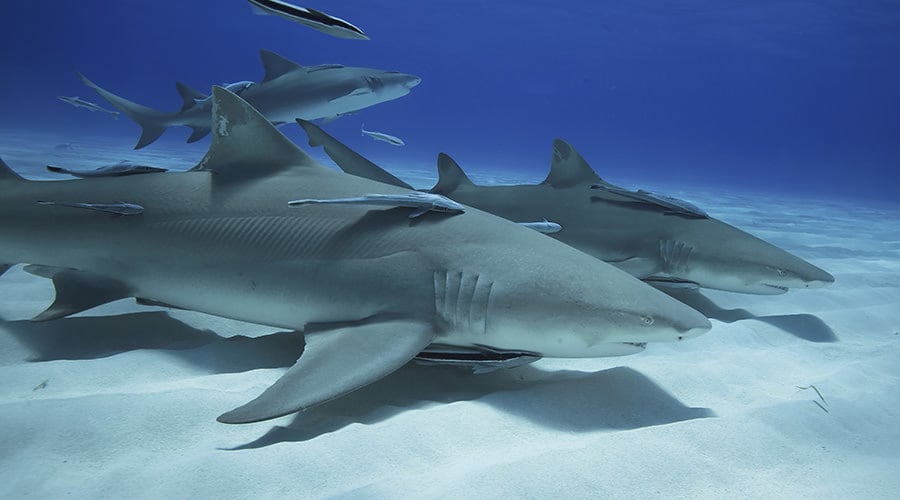 At the Shark Lab in Bimini, Bahamas, lemon sharks (Negaprion brevirostris) have been researched for decades. But the focus in Bimini is primarily on the lemon shark nurseries. The discovery of the inexplicable winter gatherings of hundreds of lemon sharks in the region of Jupiter in 2001 offered the opportunity to study the behaviour of these large sharks. Preliminary studies in the four winter seasons between 2002 and 2005 showed that these aggregations are suitable for a larger study. Funding from the Shark Foundation made it possible to start this project in 2007.

The goal of the project was to answer various questions as to why these aggregations occur, using the appropriate methods:

In addition to satellite transmitters for large-scale analyses, mainly acoustic transmitters and receivers from Vemco were used to follow any small-scale movements of the lemon sharks. The transmitters were implanted into the lemon sharks' sides. The time for this operation could be reduced from 15 to 4 minutes during the project. An implantation was reasonable because the lifetime of such a transmitter is 8 to 10 years.
The team set up its own network of receiving stations, which were initially located only in the Jupiter region. During the course of the project, the network was expanded and was able to exchange data with the new FACT (Florida Atlantic Coast Telemetry) and ACT (Atlantic Coast Telemetry) networks that were created through the collaboration of researchers. Thus almost the entire US Atlantic coast from Florida to New Jersey could be covered. Various environmental parameters such as temperature, currents or daylight periods were recorded for the study area.
In a later phase of the project (starting in 2014), the long-range migrations of the lemon sharks were studied in more detail.

In order to research the relationship among the lemon sharks and to obtain information on where their birthplaces and nurseries are, population genetic analyses of mitochondrial and genomic DNA were carried out.

During the project, 65 male and 75 female adult lemon sharks were equipped with acoustic transmitters and their seasonal movements were followed over several years. The analysis of these migrations showed that the accumulation of lemon sharks in the region of Jupiter is limited to the months of November to May and that the sharks leave the region very quickly afterwards. Outside of the aggregation periods, sightings of lemon sharks were recorded from the 490 km southern Dry Tortugas, Florida, to the 1,010 km northern Cape Hatteras, North Carolina. Analyses of different water parameters showed that migration and aggregation are directly correlated with water temperature. Lemon sharks seem to prefer water temperatures of about 20 to 22° Celsius.
If temperatures in the northern distribution area rise in the summer and autumn, they migrate southwards. They don't travel any more southern than Jupiter on that occasion since the warm Gulf Stream blocks them. In addition, the continental shelf off Jupiter becomes very narrow and the lemon sharks seem to be reluctant to have deep water underneath them. As soon as spring temperatures rise in Jupiter, they migrate northward and distribute themselves along the northeast coast of the USA. 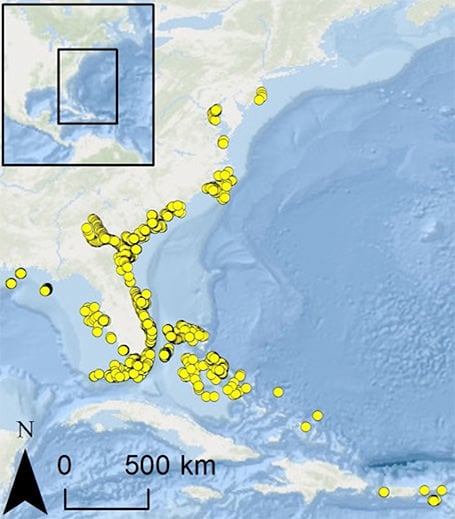 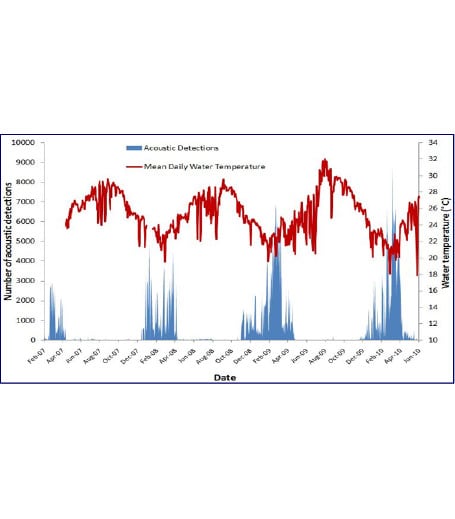 Six lemon sharks were equipped with PSAT satellite transmitters (pop-up archival tags). One transmitter transmitted from the Bahamas, another one off the coast of Brunswick, Georgia.

The genetic analysis of lemon sharks has shown that the populations of Jupiter and the Cape Canaveral region are very similar. Greater differences were found between the Jupiter population and the more southern populations near the Florida Keys (Marquesas Key, Florida). This is also confirmed by the analysis of the migrations. There were little to no movements of lemon sharks between the Florida Keys and Jupiter. Many lemon shark females carry young in Jupiter. Based on the genetic and anatomical analysis of juvenile sharks, it is likely that the females give birth to their young in spring and summer on their way north.

Seasonal accumulations of sharks pose a great risk to stocks because they can easily be overfished. Based on the data from this project, lemon sharks have been placed under protection in Florida. The project team is trying to protect not only lemon sharks but also other large coastal sharks.

The network of receivers funded primarily by the Foundation provided important information about the likelihood of lemon sharks staying on the east coast of the USA. It was integrated into the FACT/ACT network during the project and allowed a more extensive analysis of shark movements precisely along this eastern coast. The Foundation also funded the research at sea and the analysis of lemon shark samples.

Based on the data collected, lemon sharks were placed under protection in Florida.

Towards the end of the project, the team started to mark hammerhead and tiger sharks on the trips. This preparatory work provided the basis for a further project, the Migration of big shark species.