For decades, the SharkLab on Bimini (Bahamas) has offered young researchers the opportunity to work with sharks or do an internship as part of their bachelor, master or doctoral thesis. Especially lemon sharks (nursery), tiger sharks and hammerheads are often seen in the waters. The foundation supported 2 research projects at SharkLab. 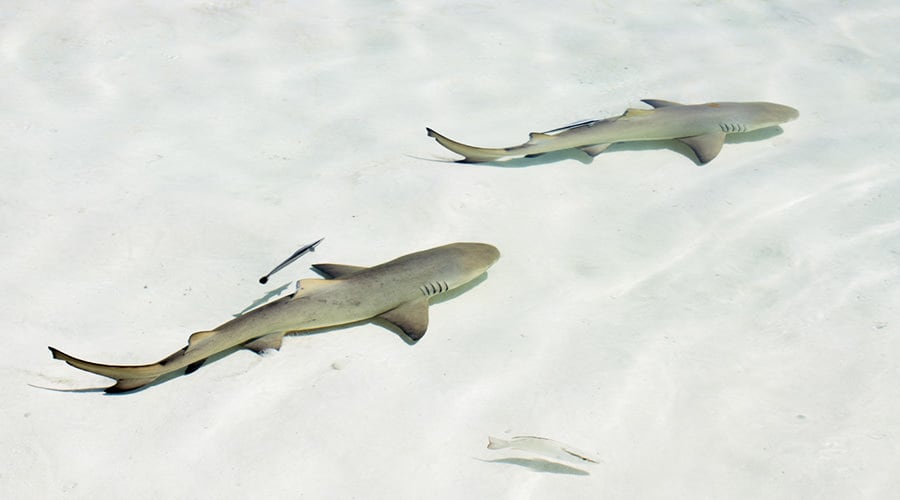 In animal populations scientific studies have repeatedly found large differences between individual behaviour. These differences are attributed to the "personality" of individuals. Per definition characteristics of a personality must not change over time and in different situations .
br /> The aim of Joffrey Baeyaert's study was to analyze the behaviour of individual juvenile lemon sharks with regard to the development of personality. As a measure for personal differences or personalities, the movement patterns of the young lemon sharks were recorded and statistically analyzed. First, the juvenile sharks were released in a marked out, complex pen in the lagoon and their movements were recorded. Later, they were equipped with acoustic transmitters and their movement patterns in the wild were recorded for 8 months.

The results were astonishing. There is a massive difference between the movements of young sharks, which suggests an individual decision making process. The sharks that had explored the experimental pen the quickest and most thoroughly also moved much further in the wild. In the wild, the personal retreat area or home range of each individual ranged from 86 to 324 m², the distances to the nearest shore from 38 to 155 m.

The study was published as "Rapid Communication" in the scientific journal Mer Méditerranée of the CNRS and as a poster. 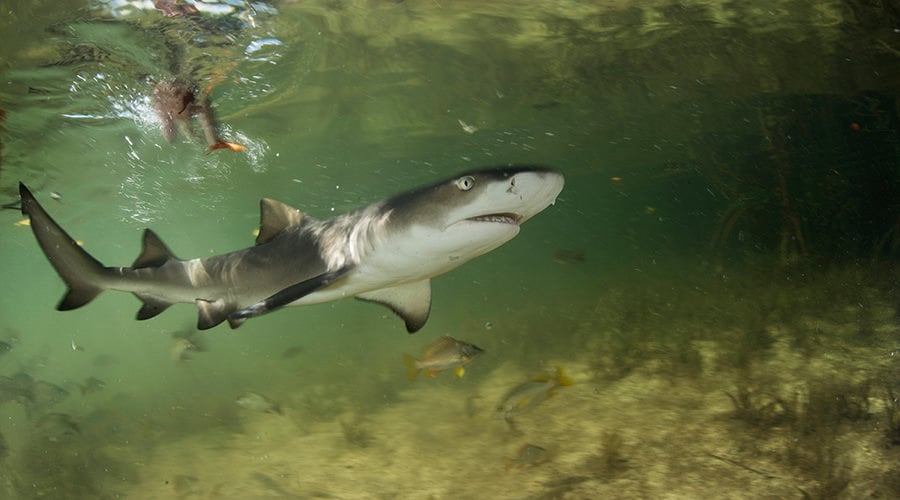 Juvenile Lemon shark in the Mangroves of Bimini.

Lemon sharks use the shallow lagoon and the adjacent mangrove areas of South Bimini as nurseries. From about 2003 to 2010 a mega holiday resort was built in the north of the lagoon, the construction of which destroyed a large part of the mangrove areas and seagrass meadows. The aim of the investigation was to show if and which influences the destruction and other human influences had on the feeding behaviour of the young lemon sharks. It was helpful for this investigation that a comparable study was already carried out from 2001 to 2003, i.e. before the construction of the resort. This information was taken as a basis for the new investigation and the investigation methods used at that time were reproduced as identically as possible. To ensure that the often highly digested prey was correctly identified, molecular biological identification methods were used.

For the study it was assumed as a hypothesis that the construction of the facility changed the species composition and frequency of prey of the juvenile sharks. This turned out to be wrong. The 6 main prey species could be found in the same proportions even after construction. On the basis of the stomach contents of the young sharks, however, a strong change in their eating behaviour compared to earlier times was observed. Beside the known species, new, small deep-sea species, chicken bones and remains of Queen Conch - a popular sea snail dish in the Bahamas - were found in their stomachs.

Eating carrion like chicken bones or Queen Conch is energy efficient for the young lemon sharks, because they don't have to hunt for it. Other effects that the change of the food spectrum has on the young sharks are unknown.

The results of the study were presented in a poster at the annual meeting of the American Elasmobranch Society in 2012.