Not all sharks are alike, but they all have gill slits. Sharks have adapted perfectly to life in the water over 440 million years and have colonized almost all ocean regions. There are bottom-dwelling, free-swimming, coastal, deep-sea and offshore forms and even sharks in fresh water. Their food spectrum ranges from plankton, mussels and mollusks to fish, birds and marine mammals. All these specializations require specific anatomical adaptations and the shape of the sharks is correspondingly different. The safest feature, however, by which a shark can be recognized as such, are the 5 to 7 gill slits, which are not protected by a gill cover (operculum) as in the bony fish. 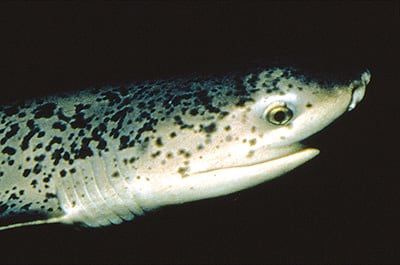 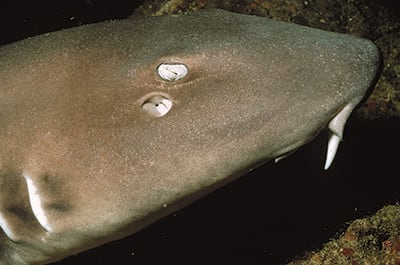 The 5 to 7 gill slits are a distinctive feature of the sharks. Most shark species have 5 gill slits, a few species have 6 or 7 like the broad-nosed seven gill shark shown here (Notorynchus cepedianus). Sharks take up oxygen dissolved in the water via their gills. The water enters through the mouth and flows past the gills and out through the gill slits. Most sharks are not able to actively supply water to their gills and therefore have to swim constantly or lie down in a current that supplies them with fresh breathing water. Bony fish, on the other hand, usually have gill covers with well-developed muscles, with the help of which they can actively pump water through their gills.

Bottom-dwelling sharks such as nurse sharks and cat sharks have a so-called Spiraculum under or behind the eyes. It works like a kind of snorkel. Without the Spiraculum, loose material would clog the gills when water is sucked in through the mouth located on the underside of the head. 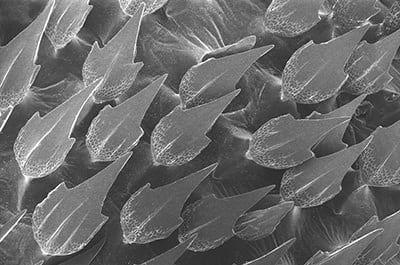 Shark skin is covered with small, very stable, tooth-like projections called placoid scales or denticles. They have the same origin as the scales of bony fish. In contrast to scales, however, they have an enamel coating and are therefore structured like teeth. These denticles are very stable and protect the shark. Especially in the offshore species, they are shaped and arranged in such a way that they greatly reduce water resistance when swimming. If you rub against the sharp teeth over shark skin, you can really hurt yourself. Shark skin with less sharp teeth was formerly used for sword handles and as sandpaper. Broken out placoid scales grow back, like shark teeth. 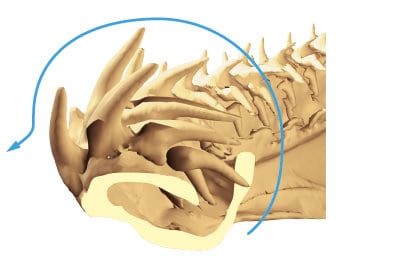 Sharks do not need a dentist

While humans have only 2 generations of teeth, the teeth of sharks renew themselves throughout their lives.They possess a so-called revolver jaw, which permanently reloads new rows of teeth. The worn out teeth of the front row fall out first and are replaced by the following ones. Thus some shark species can produce up to 50'000 teeth in their lifetime.

Millions of years ago there was a sea with many sharks at the northern foot of the Alps. In the sandpits, which were filled with sand from the region, fallen out shark teeth were often found. 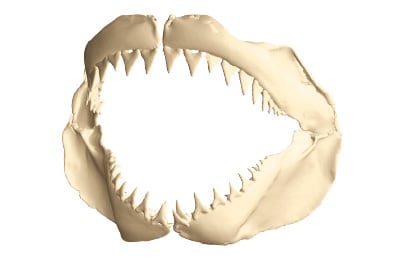 Show me your teeth and I'll tell you what you eat 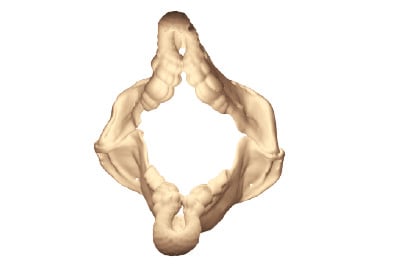 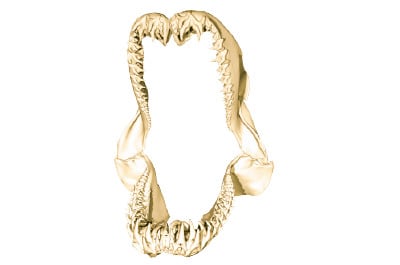 The specialization of sharks as hunters is also reflected in their teeth. Shark teeth are specialized for the many food niches. Some sharks have the same types of teeth in their jaws, often in a fixed number and symmetrically arranged only in different sizes. Other sharks have very different tooth types. The teeth are often so highly specialized that they can be used to determine the shark species. This is especially useful in paleontology, because the soft cartilage skeleton of sharks is very poorly fossilized (petrified).

Below are a few general examples:

For example bullhead sharks are specialized in cracking the shells of mussels, crabs, sea urchins and other animals with hard shells. Their teeth have become very stable chewing plates.

Sandy sharks are specialized in catching fish. Their teeth are long and very pointed to hold on to the fast and smooth prey.

Adult white sharks eat, among others, seals and other marine mammals that are too big to swallow them whole. So they have to saw out pieces of their prey. Their teeth are triangular and therefore very stable tools with a saw edge. 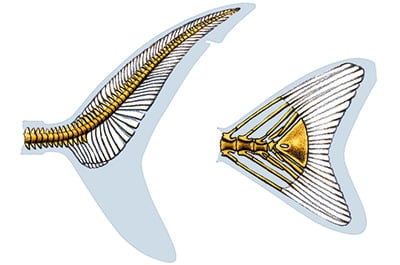 Show me your fins and I'll tell you how you live 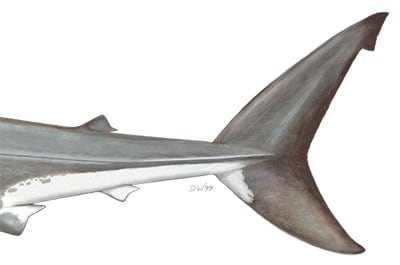 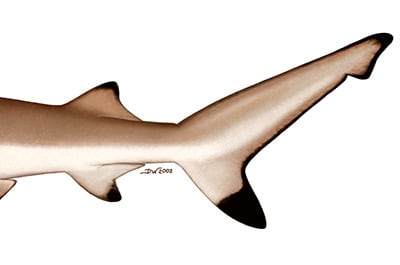 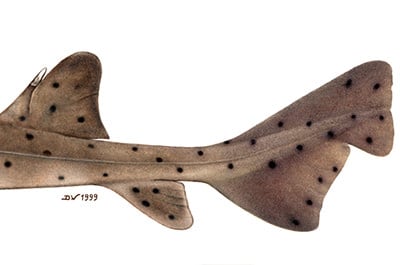 The construction of the tail fin of sharks differs from that of bony fish. In bony fish, bone rays go symmetrically up to the tips of the tail. In sharks, the backbone extends into the large, upper part (lobe) of the caudal fin while cartilage rays stabilize the usually smaller, lower lobe. Such fins are called heterocercals. In high sea species like mako or whale sharks, but also in the great white shark, the upper and lower tail lobe are the same size although only the upper lobe is reinforced. When swimming, the upper, stronger lobe of the caudal fin produces a strong pressure forward and a slight pressure downward, which can be compensated with the pectoral fins.

In general, the more symmetrical the caudal fin, the more likely the habitat is the open sea. The pectoral fins of these high sea sharks are also very streamlined, narrow and elegant.

The caudal fin of reef sharks usually has an elongated upper lobe, the lower part is shortened, allowing them to swim in shallower water. The pectoral fins are usually slightly thicker and wider than those of pelagic forms.

In bottom dwelling forms the tail is differently shaped, but the upper lobe is always much bigger than the lower one. The pectoral fins are wide, sweeping and very stable, as many bottom dwelling sharks lean on them when lying down.