Basking sharks can grow to more than 10 meters in length, yet these peaceful giants feed exclusively on plankton. They are listed on the IUCN Red List, in the appendices of CITES and the CMS as highly endangered and therefore are under strict protection in these waters and worldwide. 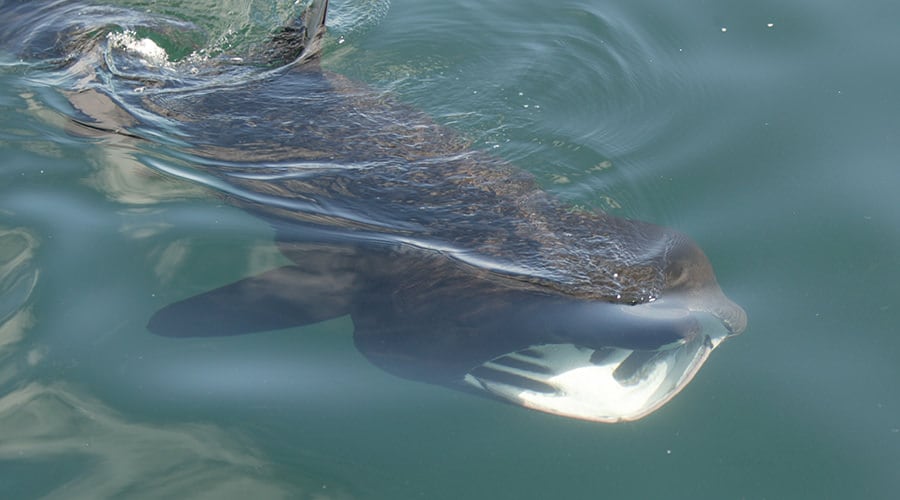 Basking sharks (Cetorhinus maximus) can grow to more than 10 m long and weigh over 6 tons, but these peaceful giants still feed exclusively on plankton. They are listed on the Red List of the IUCN and CITES as critically endangered and therefore are under strict protection in these waters and worldwide. Basking sharks cover long distances on their annual migrations. Since 2005 they have therefore also been listed in Appendix I (threatened by extinction) and II (endangered) of the Convention on the Conservation of Migratory Species of Wild Animals (CMS). The listing of a species in Appendix I commits CMS member countries to intensive conservation efforts.

Basking sharks used to be very frequent guests in English, Irish and Scottish waters. However, they were intensively hunted and almost exterminated because of their large, very oil-rich liver, which can account for up to 25% of their body weight. 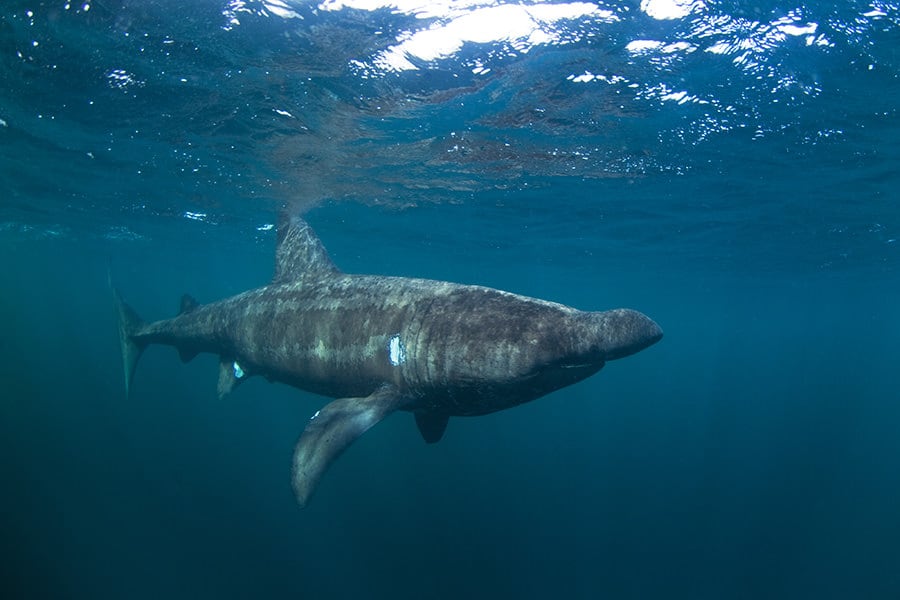 A friendly giant, the basking shark. 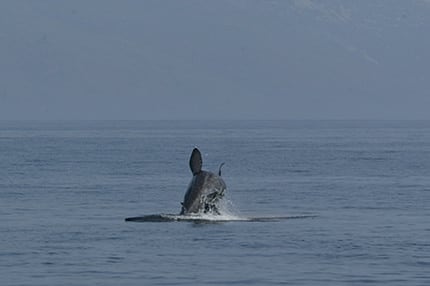 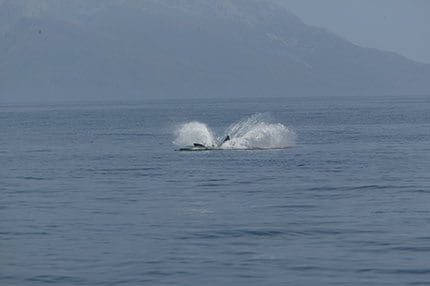 Basking sharks migrate in spring, following the plankton bloom, to the waters around England and Scotland. The aim of the project is to find out more about their remaining numbers, their migration routes, possible nurseries and as yet unknown occurrences.

Basking sharks have become a tourist attraction. Another goal of the project is therefore to inform tour operators of basking shark tours on the correct way to handle these sharks. One of the requirements is that the surveys should disturb the basking sharks as little as possible. For this reason the surveys were carried out with sailing ships. A sailing ship causes much less disturbance and threat (no running propeller) to the protected sharks than a noisy motor boat.

Since basking sharks are listed in Appendix I of CMS, the highest degree of restraint is also required in scientific surveys. For this reason, the studies were first conducted from the sailing vessel Forever Changes, later the Pelerin (basking shark in French) and supported by volunteers.

Individual basking sharks can often be identified by specific characteristics. Their typical dorsal fins are a frequently used feature. For better identification of basking sharks even in bad weather, the foundation provided the project with a Canon digital camera with 500 mm focal length and image stabilizer. 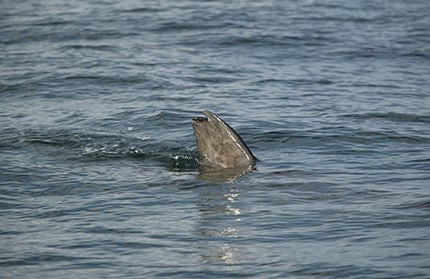 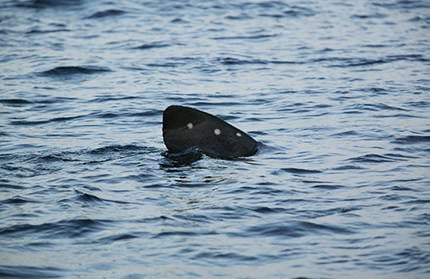 Basking sharks can be easily identified by their individual dorsal fins.

On the basis of the migrations, it was also possible to indirectly prove the global warming in these regions. Basking sharks follow the plankton blooms. Due to global warming, these blooms appear earlier and further north, as plankton blooms are also temperature-dependent.

During the study period, hundreds of transects were sailed in the Irish Sea, Scotland, Whales, Devon, Cornwall, Clydes and the Hebrides, and hundreds of sightings of basking sharks were documented and analyzed. In 2011, for example, 43 transects were sailed during two weeks of expedition and 80 basking sharks were surveyed and entered into the database.

Based on this data, a satellite monitoring programme of these regions was launched in 2013, funded by the Scottish Natural Heritage and the University of Exeter.

Based on data collected in the Shark Foundation's Basking Shark Project as well as other published data, applications and recommendations were made to the Scottish government for 14 marine protected areas which, among other things, should guarantee better protection for basking sharks in the waters of the Hebrides, Skye and Mull. Some of which have been established today.

Thanks to data collected during 14 years of research, a marine sanctuary for basking sharks was established in Scotland and more are in the pipeline.

During the excursions, lectures and leaflets were given to the operators of basking shark tours to inform them about the correct way to deal with these sharks.

Results of the project were published in 2 scientific publications, various popular science reports and a book.

The Foundation assumed the maintenance costs for the research ships Forever Changes and Pelerin and financed an 11 Megapixel 500 mm focal length Canon digital camera. This camera's high resolution, image stabilizer and magnification greatly improved the photographic identification of the basking sharks, even at large distances. The Foundation also bought a laptop computer to enable data-analysis on board. For the regular analysis of water in the area the Foundation also financed a CTD (apparatus to analyze different parameters such as temperature, plankton density, oxygen. pH, etc., in the water column).

The project was successfully completed in 2016.