Whale sharks are the largest living shark species. These peaceful giants feed on plankton and travel great distances in their search for food. Whale sharks are found on the IUCN Red List and on Appendix II of CITES and in the "Convention on Migratory Species" where they are designated a globally endangered species. Serious threats are direct fishing and bycatch, especially in fishing nets floating on the surface of the water. Since they often swim directly underneath the water surface when feeding, they are often injured or even killed by ships or boats. 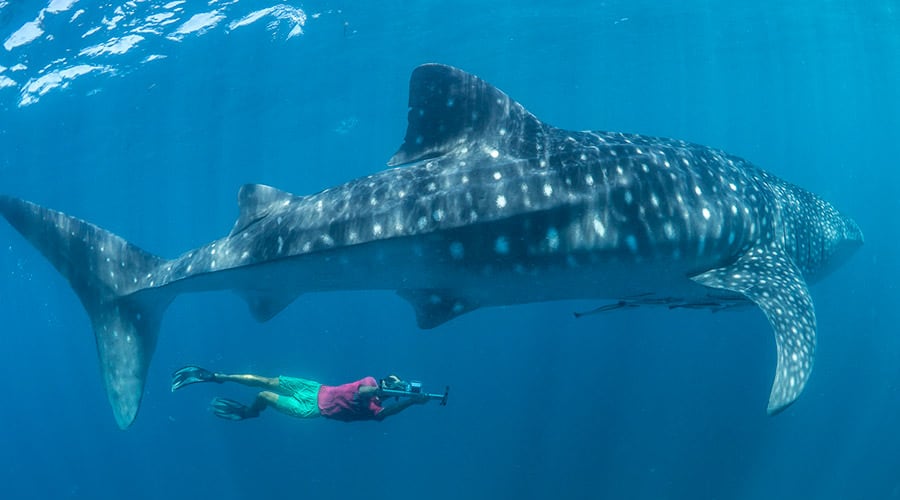 Whale sharks feed on plankton and gather regularly in specific regions in times of plankton bloom. Since whale sharks are found around the world and have naturally low population sizes, these periodic aggregations form an important aspect of their ecology.

Their populations are declining rapidly. They are listed on the Red List of the IUCN as "vulnerable" and are listed in Appendix I and II of the Convention on the Conservation of Migratory Species of Wild Animals (CMS).

We know very little about the biology of whale sharks, e.g. what do they eat and where? How and where do they reproduce? Do their global populations mix or are they genetically separate from each other?

In order for protection to be successful, the critical habitats and migratory routes of the whale sharks must be identified and protected. In addition we must generally learn more about their biology.

The team from the Marine Megafauna Foundation working with Dr. Simon Pierce and Dr. Chris Rohner examines broader aspects of whale shark populations worldwide in order to provide them with more effective protection through better understanding of their biology, behavior, biochemistry and genetics.

One of the many goals is to establish a whale shark sanctuary in the region of Tofu, Mozambique. In this region whale sharks are frequently sighted and are examined by the team. The dangers lurking for the sharks here are the gillnets of local fishermen and from boats.

In addition to work being done in Mozambique to establish a marine sanctuary for whale sharks, the team of Simon Pierce and Chris Rohner, together with local and international scientists, is studying various ecological, genetic and biochemical aspects of whale shark populations around Mafia Island (Tanzania), the Red Sea, the Persian Gulf, the Philippines, Mexico (Yucatan), the Galapagos and a new whale shark hot spot around Madagascar.

Various projects and locations include:

Worldwide research on their biology:


By 2019 16 scientific papers had been published thanks to the support of the Foundation.