Angel sharks of the Canary Islands

Angel sharks are critically endangered. Some still live in the Canary Islands region. The study will identify their nurseries and analyze relationships using molecular genetic methods. 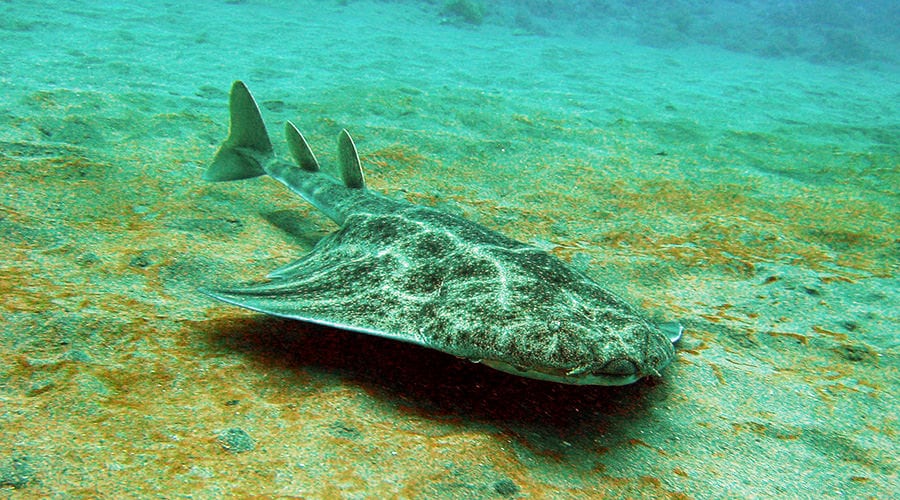 The common angelshark (Squatina squatina) is critically endangered worldwide according to the IUCN Red List. Some still live and reproduce in the waters of the Canary Islands. However, too little is known about them to effectively protect them. To protect the population of this species in the region, information is needed on where their nurseries are located and whether they are genetically exchanging with other angel shark populations. Without this exchange, the Canary Island population is at risk of extinction.

The angel sharks living around the Canary Islands should be better protected. This requires data on their exact distribution in the region, the identification of their nurseries, analyses of their behavior and feeding patterns, and information on genetic exchange with other angel shark populations. Based on this data, the government can take protective measures.

The team analyzes the stomach contents of captured angel sharks to determine their preferred diet. At the same time, tissue samples are collected for molecular genetic studies. During dives in regions of Gran Canaria, Tenerife and Lanzarote where angel sharks are found, animals are tagged and photographed. Photo identification is an especially good method which disturbs the animals only minimally.
Standard procedures are used for genetic analyses of mitochondrial DNA. They are performed in England (Birmingham) and at the laboratory of Prof. Mahmood Shivji in Florida.

As part of the studies of captured angel sharks, a publication on the sexual development of angel sharks in the Canary region was produced in 2015.
Various presentations were given at international conferences, including on photoidentification and parasites on angel sharks.
In total, tissue samples from over 500 angel sharks were collected and sent to Prof. Shivji's laboratory for genetic analysis. The samples included the islands of Gran Canaria, Tenerife and Lanzarote. However, they also included samples from females and their unborn young, allowing parental analysis.

Preliminary molecular genetic results clearly show that the populations of angel sharks found off the Canary Islands are highly isolated. This means their populations are in great danger because losses in the region cannot be compensated by immigration of animals from other regions. In 2017, the team of Prof. Shivji and F. Osaer published the entire mitochondrial genome of angel sharks found around the Canary Islands.

The project was completed more or less successfully, but it is a very bad example of scientific competition. In the Canary Islands, two groups are involved in the analysis of angel sharks: the team of Filip Osaer and Krupskaya Narváez (Elasmocan) and the Angel Shark Project (ASP). Unfortunately, as happens from time to time with scientifically relevant projects, the ASP, which joined later, tried to discredit the team of Elasmocan in order to establish itself as the only angel shark authority in the Canary Islands. The positive cooperation offered by Elasmocan in the interest of angel sharks was unfortunately ignored by ASP.