Extinction is Forever!
What can we do to protect the sharks?

People are reluctant to protect what they fear. And sharks scare us with their bad press and lurid movies. But fear is not justified. Do you play the lottery? Are you a millionaire yet? The chance of a shark accident is much smaller than the chance of a 6 in the lottery or being hit by lightning. So we have to do something about our prejudices and the prejudices of others through scientifically accurate education and information. The Shark Foundation tries to do this with its website, its exhibition, its media work and its support of shark information projects.

Scientific research on sharks is important because we still know far too little about them to enable their sustainable protection wherever necessary. Politicians and other decision makers can only act on the basis of solid scientific data, if they want to act at all... 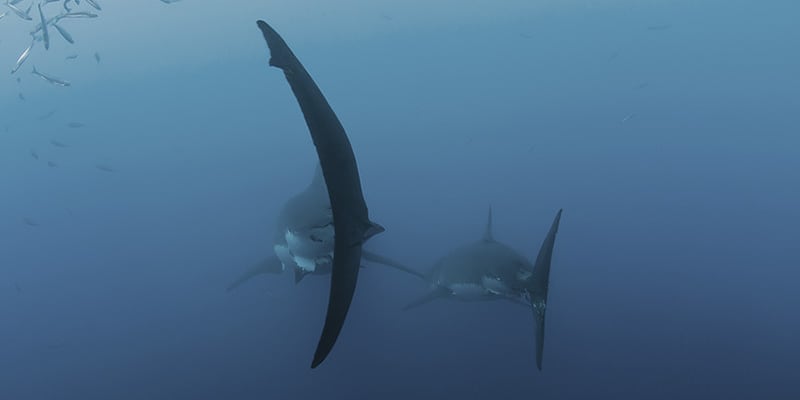 Respect instead of fear

Is such a photo of a great white shark what we imagine a shark to be? Sharks scare us, not solely because of their bad press. Humans are originally animals of the wide, flat steppes. We are relatively weak, but always hope that we can run away and save ourselves from predators on the next tree. And in the sea? We are land animals, we are slow and have bad vision under water, space is 3-dimensional and surprises can arise from the depths. And not a tree in sight! No wonder, we don't feel safe there. And that fuels the fear of sharks. But we shouldn't be afraid of sharks, we should have respect.

The Fairy Tale of the Stupid Food Machine

Contrary to common belief, sharks are neither primitive forms of life nor stupid. They are highly developed hunters with a brain that can compete with that of birds and small mammals. And sharks eat relatively little. Most sharks are cold-blooded (poikilothermic) animals and require less energy than warm-blooded animals like mammals. Most sharks do not eat daily but only once or twice a week.

The Fairy Tale of the Man-Eater

In short, sharks don't normally eat people. Most sharks eat fish and invertebrates like mussels or crabs. This is a good thing, because otherwise there would be dramatically more accidents with humans than the average of 80 accidents per year, of which 6 (7%) unfortunately end fatally. When a shark bites a human, it is because it is interested in what that might be and whether it might be edible. Usually it remains with the first bite, because humans do not fit into the food spectrum of sharks. In the 80 accidents there is usually no tissue missing, the shark bites and lets go again because it does not like the taste.

Politicians and other decision-makers need facts ...

We still know too little about sharks to really protect them

To protect sharks efficiently, we need to know where they give birth to their young. Fishing bans must be established for these zones, at least seasonally, or year-round protected areas must be established. We need to know how sharks behave under which conditions. Where, for example, they migrate to on a small and large scale. Sharks can travel several thousand kilometers on their migrations. They often cross regions where they are not protected. We need to find out how many sharks of which species are still present and where. Often existing data is wrong or very outdated. We need to know how sharks feed in order to better understand their dependency on prey. We need to know how sharks reproduce, how many young they get and when. Under what conditions populations stop to decline further or even recover. Politicians, authorities and other decision-makers need this data in order to decide on conservation programs and catch limits, for example.

Politicians only do what gets them votes. Without pressure from below, no reaction from the top...

Politicians first want to be re-elected. For this they must try to please everyone. Politicians are influenced in their decisions by lobbyists of all kinds. Lobbyists are professionals in dealing with politicians, they know how they work and are able to influence them. And the lobby of the fish processing industry is strong, because it represents tax revenues and jobs. So the far too few professional shark protection lobbyists have to come up with very good, scientifically watertight arguments to make even the slightest progress. But the more they represent the opinion of a broad public (i.e. voters), the more likely it is that politicians will react. The more scientists and shark protection organizations stand behind the lobbyists, the more successful they are.

A major step forward for shark protection (e.g. finning ban and fins attached) on a political level in the European Union was achieved by the Shark Alliance of the PEW Trust. PEW had the necessary funds to finance professional lobbyists for this purpose.

Many enthusiastic professionals and amateurs are involved in shark protection. The professionals are mostly scientists who perform research on sharks and are strongly engaged in their spare time to achieve their effective protection. The amateurs are enthusiastic, mostly volunteer shark fans. Lacking today are professional shark lobbyists. Although there are lobbyists in large organizations such as Greenpeace or the WWF, they fight not only for sharks but also for the environment as a whole. Lobbying is a hard job and professional lobbyists cannot live without an income. Unfortunately, there are far too few large organizations and funds around today that are available to finance specific shark conservation lobbyists.

Reduce demand! Of course this means no shark fin soup, cartilage preparations - and do you really need shoes made of shark leather? ...

A simple economic rule says that the higher the demand, the more intensive the production. The opposite is of course also true.

In addition to environmental destruction, finning, i.e. the cutting off of shark fins (often while they are still alive) is the greatest danger for sharks. About 75 % of all sharks are killed just because of their fins. The shark fin market in Hong Kong alone makes billions of dollars in sales every year.
In order to stop such wasteful exploitation of sharks, regulations have been enacted in the EU, the US and a few other countries that prohibit bringing ashore shark fins only. Instead only whole sharks may be brought ashore. This makes the business less profitable for the fin hunters, as fins only make up about 14% of the weight of a shark. So the finning industry tries to sell as much of the rest of the sharks as possible at a profit. Shark cartilage powder as a food additive - also mistakenly marketed as an anticancer agent - is just one example. Shark meat comes into restaurants and fish counters as curly, vealfish, conger eel, sea sturgeon, carbonado fish, bacon fish, king eel, rock salmon and as a component of fish & chips or fake crab meat. Shark products can even be found in fertilizers, dog food and collagen-based cosmetics. The very sturdy shark and ray leather is used for shoes, belts, wallets or similar leather products.

We can all do a small part in helping to reduce the pressure on global shark stocks by buying more consciously and by trying not to purchase products in which sharks have been processed. Especially when we are abroad, we should be especially careful not to buy shark products such as shark fin soup, shark jaws, shark teeth or shark embryos in alcohol – yes , these are actually available, e.g. in Florida. That way we reduce the demand somewhat and hence make the fin and shark catching trade a little less profitable.

Together we can achieve more

What can you do? There is an old saying that you can achieve more together. This of course includes protecting sharks, e.g. by supporting organizations that are earnestly committed to shark preservation.

The Shark Foundation has been committed to shark preservation for over 20 years. Since our establishment we have invested more than 1.5 million Swiss Francs in over 30 small, large and very large shark preservation projects. Over 80 scientific publications have resulted from such projects. We actively support these projects with our broad international network of scientists and specialists. Our Shark Exhibition attracted visitors in 15 cities. In addition we provide information, answer questions and edit texts for various media and privately interested parties.

The Shark Foundation was established in 1997 in Switzerland as a nonprofit, internationally active foundation. In Switzerland, foundations are not allowed to have members and may not charge membership fees. However, you are welcome to support us with general or project-specific patronage contributions and donations. Shark protection is expensive but every single shark counts, because: