White Sharks in the North Atlantic

White sharks are strongly endangered worldwide. As a top predator of the oceans they are at the end of the food chain, making them susceptible to accumulating a very high percentage of environmental pollutants, e.g. mercury as well as microplastics and nanoplastics. 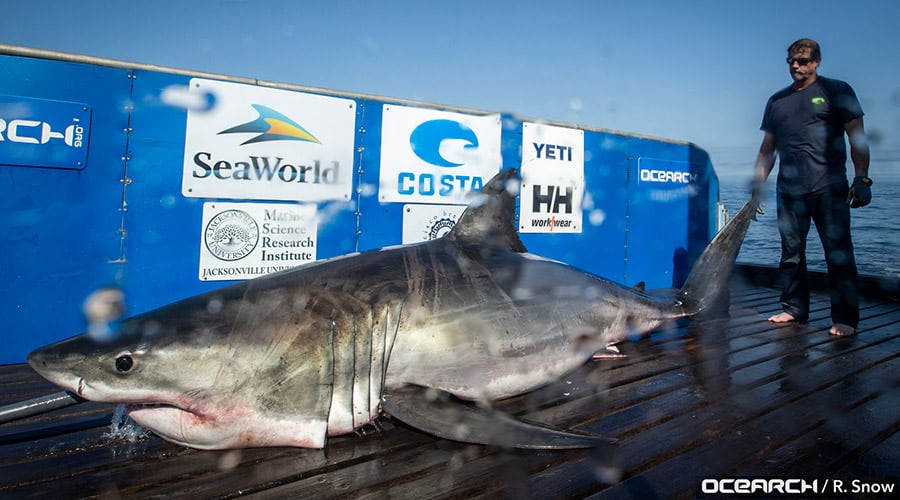 The oceans are heavily polluted. In addition to the damage caused by global warming, millions of tons of plastic and environmental toxins pollute the oceans. Unfortunately there are only very few great whites left in the oceans. Thus we need to find out how the health status of the last populations is affected by the increasingly deteriorating environmental conditions. Great white sharks are just a model here. The knowledge gained can also be used to protect other shark species. The project started in 2012 and has been co-financed by the Foundation since 2018.

Research on white shark populations is currently in progress in cooperation with Ocearch and should provide information on their general state of health. Moreover, stress and other hormonal tests should show the stress level of white sharks when they are caught and examined.

The goal of the entire project is to study 60 animals, 20 from each of three life stages, in order to answer the following questions:

The subproject manager, Michael Hyatt, is a veterinarian whose research on "stress caused by catch examinations" on lemon sharks, bull sharks and hammerheads in Rookery Bay was already being financed by the Foundation and was published in three scientific journals.

The ship Ocearch is used for this research and is equipped with an appropriately large lifting platform that can be lowered into the water alongside the ship. The sharks are caught as gently as possible and drawn onto the lifting platform. Once there a hose is put into their mouth to supply them with fresh oxygen during the approximately 15 to 20 minute examination. To avoid any additional stress their eyes are covered with a wet towel. During the brief examination period they are measured, samples are taken of their blood and tissues, and in certain cases ultrasounds are made. In order to analyze their migration routes and movements, they are also equipped with a satellite transmitter (not financed by the Foundation).

Part of the blood and other biochemical and chemical tests are made immediately on board; others are made on land in specialized laboratories.

A total of 56 great white sharks have been studied since 2012. Beginning in 2018 expeditions to South Carolina, Georgia, Florida, Massachusetts, Nova Scotia and Canada, resulted in the examination of 22 animals . Together with data acquired in earlier expeditions the following could be achieved:

Tests for vitamins, heavy metals, minerals and environmental toxins are still in progress.

The project continued to make good progress in 2019. Excursions to Carolina, Georgia, Florida, Massachusetts, Nova Scotia and Canada were successful. An interim report with data from the expeditions was submitted at the end of 2019.

In 2020, the Covid-19 pandemic brought this project, like most others, to a standstill. Travel was not possible for a long time and even in September 2020, national and international restrictions still affected research projects.