Blue sharks (Prionace glauca) are large pelagic sharks and top global predators found in temperate and tropical waters. Like other shark species they are a vital regulation factor in their marine ecosystems. 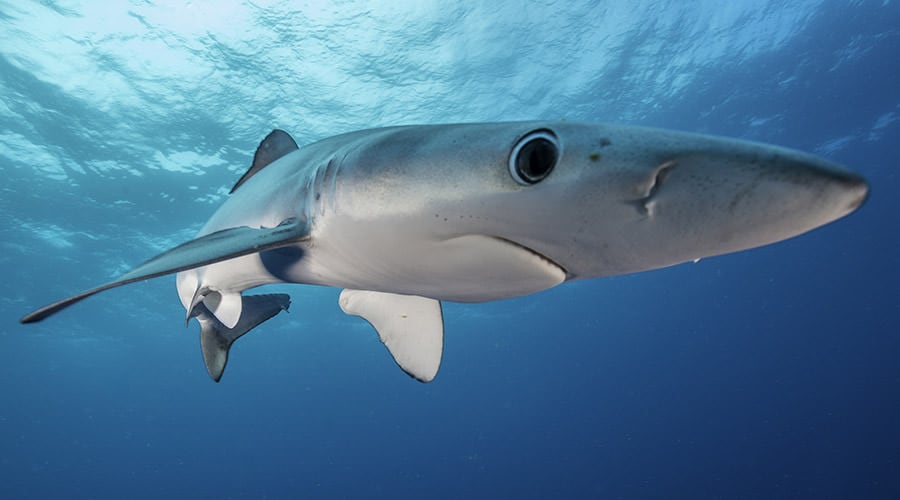 Blue sharks are caught directly for their fins or wind up as bycatch in pelagic fishing fleets. Their current status on the Red List of Endangered Species is "Near Threatened," i.e. shortly before, or with a strong tendency to becoming "Endangered." Any respective current data on this subject is not available at the moment so that they may already have to be deemed as "Endangered". Blue Sharks are not only threatened directly by the fishing industry but as top predators they are also exposed to another big problem, namely the accumulation of environmental toxins. Concentrations of arsenic and mercury that exceed by far the European limits have been found in blue sharks. PCB (polychlorinated biphenyls), PAH (polycyclic aromatic hydrocarbons) and DDT (dichlorodiphenyltrichloroethane) can also accumulate in top predators, influencing their health and fertility

The objective is to analyze the blue sharks in Cornwall with regard to their health and to the genetic composition of their populations. It is expected that environmental toxins will be found that have accumulated in their bodies. Population size should also continue to be estimated. An additional goal is to educate and sensitize the local population and fishermen on the blue sharks that frequent the southwestern coast of Cornwall.

In order to engage a broader public to help with the identification of blue sharks, an online photo databank was created. Photos of blue shark dorsal fins will be collected in this databank and will be analyzed later on.

The project encountered some snags with regard to the biopsy needles used because blue sharks are very fast swimmers. They were resolved by the Fiji research team and Gary Adkison, President of the US Shark Foundation, thanks to their longstanding experience in collecting samples from bull sharks. This is one of many examples showing how the Shark Foundation was able to solve problems quickly and efficiently thanks to its large network of research teams.

The photo collection and excursions continue.